Prices of gold and silver corrected sharply on Thursday and Friday after a sharp, continuous rally. The correction is expected to continue in the short term. Silver prices (without the goods and services tax) in Mumbai’s spot market on Friday closed at Rs 46,980 per kg, or 5.4 per cent lower than yesterday’s close of Rs 49,675.

On the Multi Commodity Exchange (MCX), October gold was trading at Rs 38,428 per 10 gm while December silver was at Rs 47, 860 a kg. On Thursday, opening trade in the US saw a sharp fall in gold and silver, with silver correcting faster than gold because its rise in the past few days was also equally fast.

The silver contract on the MCX was down on Thursday in a few hours by 4 per cent while gold was also down 2 per cent in the futures market. The fall in silver continued further while gold has taken a pause only to fall further.

Gnanasekar Thiagarajan, director, Commtrendz Risk Management Services, said: “Yesterday’s fall was in response to the strong US nonfarm private employment data released by ADP (Automatic Data Processing) triggered stops and resulted in a scramble for profit-taking. Also, equity bounced back shedding macro concerns, which has taken away the safe-haven premium. As it is, prices were unable to cross near-term highs, and traders who were long at the highs had sweaty palms and exited in a rush.”

Increase in bond yields in US treasury with 2-year yield falling below 10 year ending inverse relationship also eased uncertainties and gold, silver fell sharply. He sees further downfall in gold to $1,480 (MCX: Rs 37,500) in the near-term in gold and $18.00 (MCX: Rs 47,000) in silver in the coming sessions.

In global markets, both precious metals continued downward spiral. However, demand is yet not seen. While so far jewelers have been waiting for consumers to return when they accept prices are staying high and no big fall expected. A fortnight after week known as pitrupaksha may still not see gold demand. 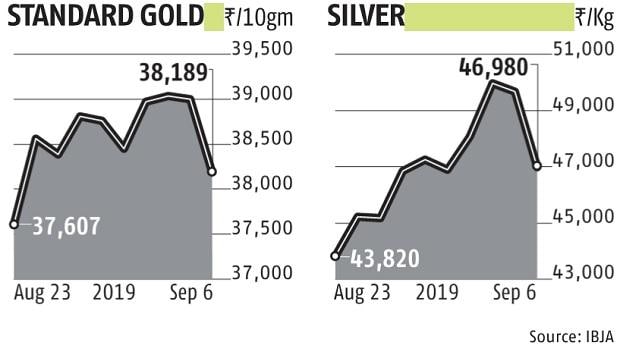 However, Rajiv Popley, MD of Popley Group (having retail stores in Mumbai and Dubai), said that they don’t see prices falling much. He said: “40,000 was a shocker for consumers, but once it crosses the mark, demand will come back. Consumers always buy on an upswing. We are looking at 42,000 by Diwali as the rupee downfall is kind of unstoppable.”

On MCX, even crude oil prices today fell 2.8 per cent and trading Rs 3,977. Crude oil contract on MCX generates highest volume. Most metals were also down 1-2 per cent on the exchange, however with trade war fears, metals are expected to recover.

This year has been good for the exchange business with the current financial year’s average daily turnover moved up to Rs 30,040 crore as against Rs 23,988 crore during the corresponding period last year.